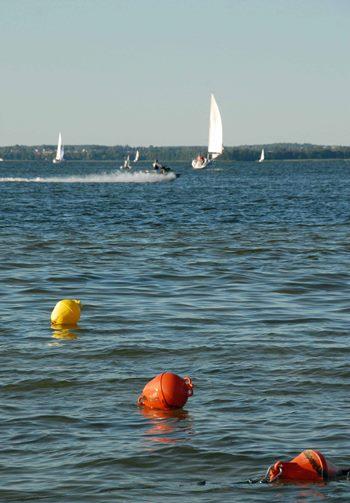 We have just come to the end of another beautiful day in Polish Masuria. Hot sun and a nice cool breeze smiling at all the sailors. A crowd of people on the beach, many lovers of swimming and the Niegocin lake as busy as rush hour in Warsaw, with yachts, motor boats, jet skis and water bikes – I do not know whether they are not more numerous than the fish. This is a real holiday idyll.

All of the above caused me to reflect that not much is needed for mother nature to show her less pleasant side. On the 21st August 2007, on the Mikołajskie lake, after a beautiful day like today, a storm took place which was twice as strong as the one predicted by the weather forecast. The speed of the strong wind reached 130 km/h (12 on the Beaufort scale) and unsettled the calm water so that the waves reached a height of 3 meters. The cataclysm lasted only 10 minutes but overturned and sank even those yachts without sails, causing the death of 10 people. The white squall, which worries even very experienced sailors, is the colloquial term for a sudden, hurricane wind, which may strike even when there is a clear sky. It appears in less than no time and disappears the same way. Nobody knows how it develops. Its name comes from waves crashing down, covered with white foam. If one falls directly on a boat or yacht, it could simply push it under the water.

It doesn't take much for water which is usually a holiday attraction to turn into the source of a tragedy. Unwatched children, adults with their minds clouded by heat or alcohol, bravery or sometimes pure stupidity mean that every year some families come home without nice memories.

If people do not respect Mother Nature and do not use the water wisely, no lifeguard, meteorologist or lifesaving equipment will help. Water, regardless of whether it is in a pond, river, lake or sea may be dangerous. We should not fear it, but we need to respect it to be able to safely use its undoubted charms.