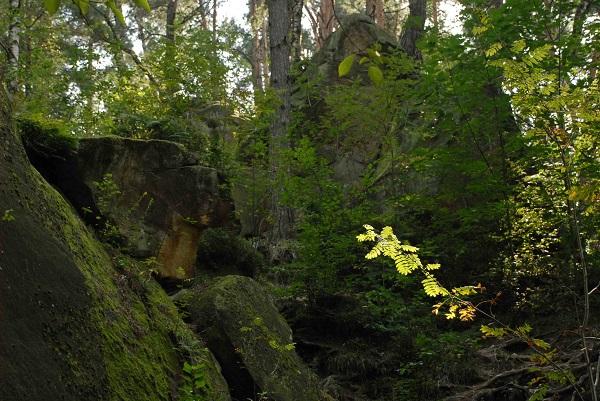 We only get the chance to find out about some interesting places when by coincidence we are in the neighborhood. It was exactly this way, when visiting my daughter at the holiday camp, that we had an opportunity to see the Fossilized City Reserve.

This amazing cluster of geological formations lies close to Ciężkowice in the vicinity of Tarnów and spreads from the Biała River Valley up to the top of Skała Hill. Until the XIX century, the beauty of this place was known only to its residents. The Reserve was created in the 1970s, thanks to which this place was rescued from destruction by tourists wanting to leave behind dubious signs that they were there, and also from stone robbery for industrial purposes. Nowadays, the Fossilized City Reserve is a more and more popular tourist destination. To make this place more accessible for tourists the main path was upgraded, stairs and handrails were built in the most difficult places, the trail was marked, an educational path was created with information about the various rocks, and the most interesting places were illuminated. A nice surprise was the fact that entrance to this place is free.

Wandering the picturesque slope of Skała Hill, every minute we noticed stony formations that completely didn't fit in with the surrounding nature. Every one of them got its name from its unique shape and colour. We passed by the Witch with a hooked nose, the stately Town Hall consisting of five vertical walls, huge Grunwald with a commemorative plaque and entrance to Grunwald Cave, Hell with an abnormal red colour and many other interesting places. Many of these huge rocks were overgrown by a pine forest. It is difficult to believe that these durable trees have found enough space and soil to grow roots in the rocky rifts. The names of some of the rocks are ideally picked. The Eagle really looks like a proud bird, and you would like to put The Mushrooms into a pan. Some of them, however, I would give a completely different name. One of the rocks apparently resembles a badger's head, and so it is named. To me it looks more like a turtle. Altogether, it doesn't matter. Even without this, the Reserve is unique and worth seeing. It is a meeting place for scouts as well. In the cosy, rocky gorge named Scouts' Valley, there lies a glade with benches and a fireplace.

Even though we know that it was the sea along with overlapping sediments of different thicknesses and erosion processes that created the Fossilized City, it is nice to believe that its genesis was much more romantic. There are two legends related to the creation of these stony formations. The first one is about the cruel owner of the surrounding soils, whose behaviour angered God. The Creator sent a huge storm over the city, which destroyed it completely. The second one tells us about the greedy knight Cieszko, who broke the holy rule of hospitality, resulting in the death of a beautiful girl and leading to the destruction of this lively city.

Whatever the reasons for the creation of the Reserve, allow yourself to be charmed by these amazing natural formations. If you look carefully enough, maybe apart from the fancy rocks you will find other formations as well. Look carefully at your path, because on one of the boulders lies a resting forest crocodile...

Please remember that even though the Reserve is not too big, wandering on the Skała hillsides requires - especially after it's been raining - proper shoes. Sandals, "ballerinas" or flip-flops are not suitable.