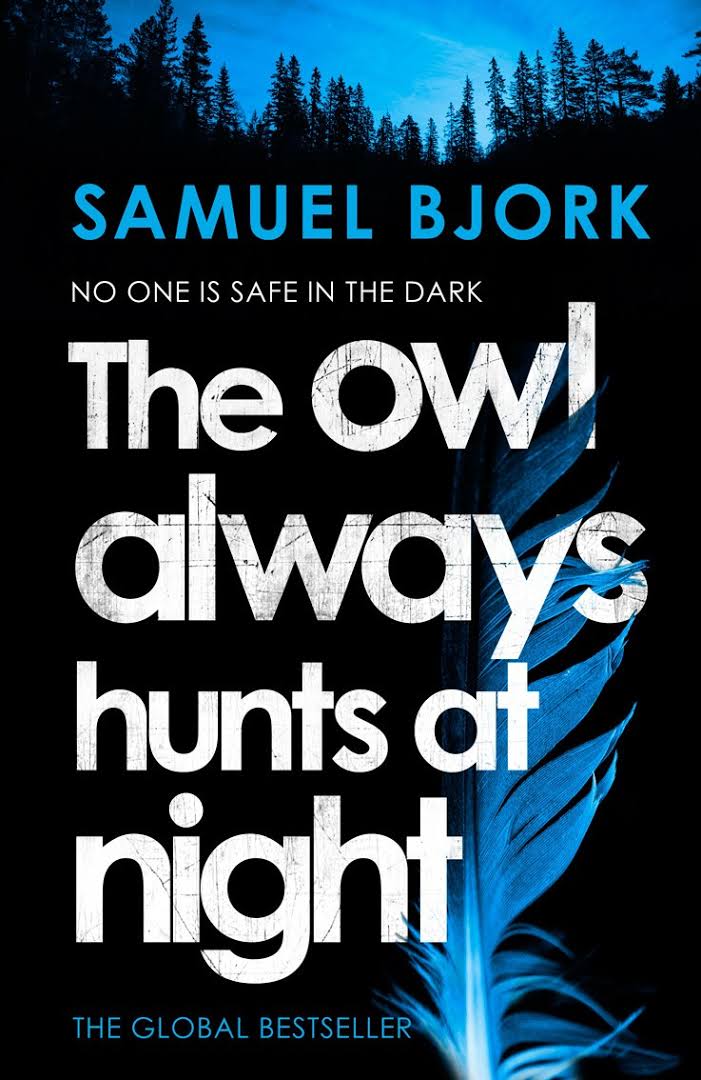 When I read "I'm Travelling Alone" by Samuel Bjork a few weeks ago I wondered whether his next book would be equally good, and I was not disappointed - "The Owl..." is even better. Fast-flowing, gripping action and heroes I already knew from the first part guaranteed a few exciting evenings this time as well.

In a pentagram of candles on a bed of feathers lay a murdered young girl. This almost theatrical scene is the beginning of a gripping thriller. Leading the investigation, Mia Kruger and Holger Munch from Oslo homicide must once again confront a murderer who seems to be perfect in his insanity. Horrific movie scenes of the murdered girl and her assassin in a uniform of feathers, delivered by a hacker, give all police department workers a chill. Brutality and severity seems to be the most gentle description of the movie's creator. When the investigation ends in deadlock, Mia's sixth sense connects the murder with the will of a rich ship owner. His son can inherit the wealth only on the condition that his wife will not have her own children. You can guess that the woman did have children...

As in "I'm Travelling Alone" we find here a thread that ties the case to the police officers leading the investigation. Once again Munch and Kruger will race against time, nerves and their own demons. The divorced Holger cannot live with his loneliness and cannot communicate with his adult daughter, who is weighing up changes to her hitherto stable life. Mia, acting on the edge of waking and sleeping, fights against depression and addiction to alcohol and pills. I wondered sometimes whether without these drugs she would be so perceptive and keen. Do we dare to imagine the opposite? What would she be able to achieve if she were not inhibited by alcohol and drugs?

Recently, with more and more wariness, I reach for the next Scandinavian detective story. If you think of the most awful crime, scary circumstances or sophisticated torture methods you will find them in one of these books. Crimes which cause children and elderly people to suffer are for me the most harrowing. I found both situations in the "Sezon niewinnych" ("I'm travelling alone") by Samuel Bjørk. Only the fact that it is an excellent novel which is difficult to put down allowed me to read it from the cover to cover. I felt exactly the same when I read "Klara i półmrok" ("Klara and the Twilight") by Jose Carlos Somoza. On the one hand I felt disgusted and angry, so I closed it every few pages, and on the other hand it drew me like a magnet, so I opened it again and read on. This time it was similar. I turned page after page, equally fearing what the next one would bring and eager to find out what would happen next.

The bodies of two six-year-old girls are found in a Norwegian province. The setting looks like a stage design. The girls are clean, well-tended and clothed in dolls' dresses. They have school bags and airline tags round their necks with the information: "I'm travelling alone". Carved into their fingernails are the numbers I and II. The detective Holger Munch and Mia Krüger, his subordinate with a sixth sense, investigate the murder. She discovers that it is connected with an unsolved matter concerning the six-year-old kidnaping of an infant, and the numbers suggest that the girls won't be the last victims. Mia and Holger work against the clock, the murder and the police officers' own demons leading them by the nose.

I bought the book "The smell of other people's houses' by Bonnie-Sue Hitchcock for my daughter - our bookworm. The school holiday is the time when she reads books wholesale, and she is able to read everything I suggest. I take advantage of this and buy or lend her books which are especially for teenagers as well as set books, so that we will have less work during the school year. The thing that intrigued me about this book was its remarkable title. Now that I have read it, I don't know who it is aimed at. Is it for teenagers or maybe for adults who want to understand their children? I think that it should be read first and foremost by those who don't even try to understand young people. The book presents the typical problems young people have in the difficult and inhospitable surroundings of beautiful Alaska, which, like in reality, partly have their roots in our adult life. They result from differences in our characters, and from a lack of empathy and communication.

Have you ever noticed that every home smells different? Our food, flowers, pets and cosmetics create a domestic smell which is most often associated with love and safety. However, there are also homes which have a different smell and leave young people with childhood memories connected with uncertainty, peril or threat. Longing for a home with a mum, clean sheets and love, fomented in particular by a different scent, strict rules and the lack of any feelings, teenagers feel the need to look for something new. Sometimes they find and fill the emptiness, but sometimes they happen upon a substitute, which when it disappears leaves a permanent mark and changes their life forever.

Hygge – the magic recipe for happiness?

Who wouldn't like to be happy? If we ask ten people what happiness means to them, apart from obvious things like a healthy family and world peace, everybody will say something different. For one person it could be a family dinner in the country, for another a fishing trip, or sunbathing on a white beach under a palm tree with a cocktail, or skiing on a glacier. There are as many people as there are ideas for what to do to feel happy. Just feel... Could happiness be a permanent status? Would we then appreciate the little moments which make us want to shout and sometimes affect us in such a way that we don't know whether we are closer to laughter or tears?

That's why I think there isn't one recipe for happiness. Reaching for the book "Hygge the Danish art of happiness" by Marie Tourell Soderberg, I wasn't under the delusion that I would find there a recipe, like in a cookery book, for what to do to be happy. I got it out of curiosity and I paged through it with pleasure. I say "page through" because there isn't a lot of text, so this small book with beautiful pictures is just nice to look at.

Hygge doesn't have one definition, but generally speaking it refers to the moments which affect us positively, filling us with calm, pleasure, maybe joy – when we are in consonance with ourselves and the surrounding world. Sometimes we know that we feel hygge during a meeting with friends at home where everybody feels comfortable, where every guest has their own favourite place on the sofa and a cup of tea always awaits us. Hygge can be an interesting book, a warm blanket and a glass of wine after a long, busy day. We try to perform our small rituals to feel good. But hygge may happen by chance, here and now, when we feel that this moment could go on and on... Maybe during a hot summer afternoon with a cup of coffee and a close friend; maybe in the calm evening when we read book to our children; maybe on an empty beach watching the sunset arm in arm with a sweetheart; or maybe alone in the garden in a hammock with a glass of stewed rhubarb?

“I run like a wild tapir. 93 approaches to Bartoszewski” Marek Zając

Just before the holiday, one of Warsaw's primary schools was named after professor Władysław Bartoszewski. During the ceremony, which was attended by, among others, the ambassador of Israel Anne Azari and the professor's son Władysław T. Bartoszewski, a lot of beautiful, nice and moving words were said about the patron. The invited guests told the children some titbits about the professor; for example, that he liked geography but didn't like mathematics, and that from the age of twelve he knew he wanted to be a geographer or reporter.

Encouraged by the stories about Władysław Bartoszewski, I decided to reach for an inconspicuous little book called "Pędzę jak dziki tapir. Bartoszewski w 93 odsłonach" ("I run like a wild tapir. 93 approaches to Bartoszewski") by Marek Zając. I discovered that it is the kind of book I have read many times. It is excellent, especially when the wider world weighs me down with problems. It lets you crack a smile and look at things from a distance, because, as the professor said: "We do what we can, and what we can't do we will do as well!"

In 93 short stories we get to know professor Bartoszewski from a different viewpoint. The Internet, TV and public speeches show us only his positive but official side. However, he was both usual and unusual, with superior intelligence, inspirational, and full of positive energy. We can recount his memoirs at length, which sometimes seem like they could have come from a breath-taking movie: About Auschwitz, AK (Polish Home Army), support of Jews during the occupation, his work, politics and social activity. Thanks to this book we won't forget that he was a friend to all honourable people, who used to come to him to charge their internal batteries with positive energy, and that he could joke like nobody else and was the master of the witty comeback.