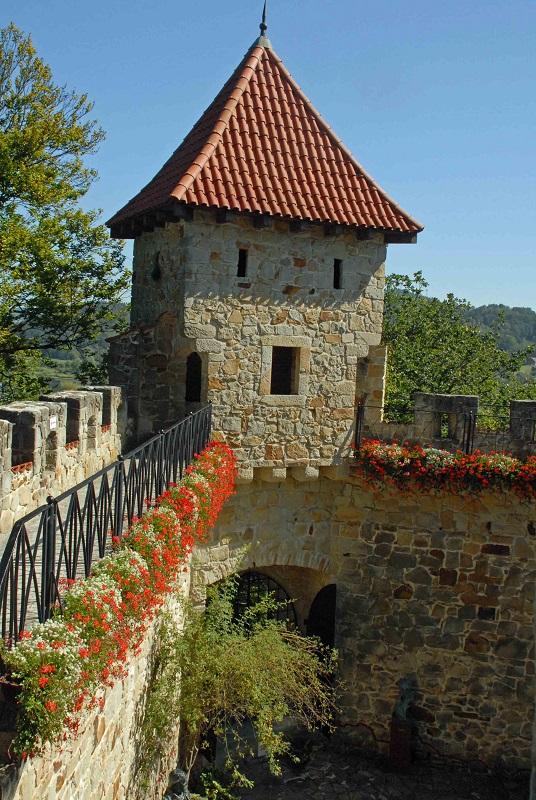 We spent the end of this year's holiday in the south of Poland in the neighbourhood of Tarnów. It was not our first time in this region, but it was the first time spent in such an active way. We visited three castles - each one in a different style but worth seeing for different reasons. The most traditional castle with regard to the building and the way of visiting was Nowy Wiśnicz castle. It was particularly remarkable for my son due to the trip using virtual reality goggles. The second castle in Dębno with its unique and tasteful architectural interiors looks very magnificent. According to the legend, in the castle tower next to the ballroom the owner of the castle's daughter was walled up together with her dowry. Apparently, the girl used to have uniquely beautiful golden plaits. In the XX century a skeleton and golden plaits were in fact found, but the treasure had disappeared.

The third castle we saw was Tropszyn, uniquely and picturesquely placed on a rock by the Danube river. The name of the village Wytrzyszczka, which you should look for on the map, may cause a problem not only for foreigners. The castle is actually a reconstruction of a defence fortress from the XII century. The red lines on the walls show the real status of this castle before the renovation was done. Similarly, like in many different such cases at the time, the atmospheric conditions and easily accessible building materials meant that the castle practically ceased to exist. The reconstruction started back in 1993 and is actually still going on. The castle has been accessible for tourists since 2005.

We started the visit from the dungeons and cellars, going through some dark stony corridors. Later we passed a few floors of castle rooms where you can find some exhibitions. In one of them my son found some treasure, which was for him more attractive than the Inka one. The very well-equipped entertainment room for kids with a mini-trampoline, cars, bricks, soft toys and a lot of different toys allows parents to rest for a while. The visit ends with a walk along the walls and admiring the view of the river. The courtyard is full of colourful plants, interesting sculptures and is somehow filled with a positive energy. We spent a while there with real pleasure.

We were particularly interested in the Inka culture elements found in the castle. In such environment they are very exotic. Because there is no guide, to solve their mystery you have to dig into the history of the castle and its owners. Apparently, one of the descendants of Nidzica fortress' owners went away to Peru. Fate caused his descendants to come back to Europe. They brought with them some part of the legendary Inka treasure, which apparently they hid somewhere in our country. After the Second World War, some Inka writing was found in the Nidzica castle, which led the search directly to Tropszyn castle. I do not know whether it is worth looking for this treasure, taking into consideration the legendary curse hanging over it, but the history is surprising and intriguing. At the end it is worth following a very narrow path around the castle and seeing close up the uniquely cracked rock on which the castle is placed.

The idea behind the renovation is to create an indestructible castle. The materials used are flameproof. We may discuss of course whether such reconstruction has sense, or whether it is not wiser to protect the walls and allow them to tell their own history. These deliberations I leave to the visitors. I think, however, that for our children, for whom a castle mainly means Hogwarts, such places help us to imagine the past and the legends encourage us to go on walking tours and become more acquainted with our country.