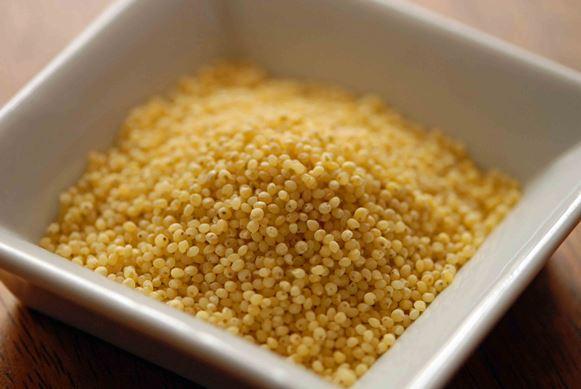 Millet groats are one of the best and oldest types of groats. As well as a lot of nutritional value they have another advantage which is critical in culinary terms: They go with both salty and sweet dishes.

They have a little starch, but a lot of easily assimilated protein, vitamins from the B group, iron and copper. Millet groats are light and don't provoke allergies because they don't contain gluten. Not many people know that they are a natural rhinorrhoea remedy because they have antivirus properties and reduce inflammation of mucosa. Millet groats are a very valuable product for students and people who hard work because they contain a lot of vitamin E and lecithin and improve memory and concentration. Women who care for their hair, skin and nails should eat them because they are a rich source of silica and prevent osteoporosis.

Modern cooking puts speed and convenience first. It generally suits me but when it comes to cooking millet groats I follow my grandma's and mum's instructions. I tried to cook millet groats "from the bag" but notwithstanding the cooking time, they had a pappy texture and I didn't like them.

Today a few instructions on how to cook crumbly and tasty millet groats.

half a teaspoon of salt

Millet groats prepared in this way can be used to accompany meat or vegetables dishes, or can be served with fruit and nuts, or used as an ingredient of more sophisticated dishes.