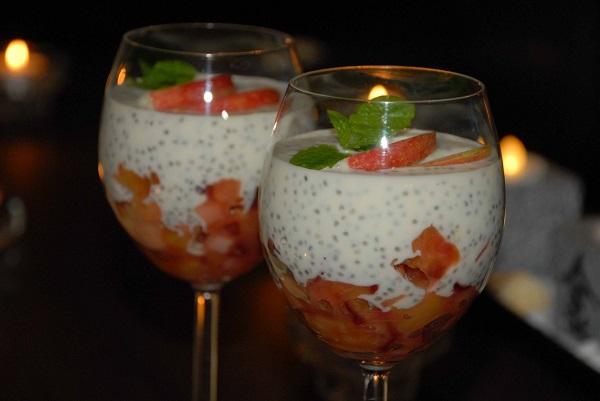 Chia is a species which comes from the central and southern parts of Mexico and Guatemala. It is valued for its seeds. Chia was grown by the Aztecs during pre-Columbian times. Historically, chia seeds were used as a basic comestible product of Aztec tribes in the middle of Mexico.

Chia seeds, which are tasteless, may be added to everything. Dry seeds are great for yoghurt, bread or salads. They absorb water very well, so are excellent for thickening soups or sauces. Among all oils, the oil from chia seeds is the richest source of Omega-3 acid (63%). For comparison, the oil from linen contains 54% Omega-3 acid.

Omega-3 acids help the brain to function, facilitate study and improve memory and concentration. They also aid the nervous system, have a calming effect and can even help to relieve the symptoms of depression. For older people, they can help to prevent the onset of Alzheimer's. 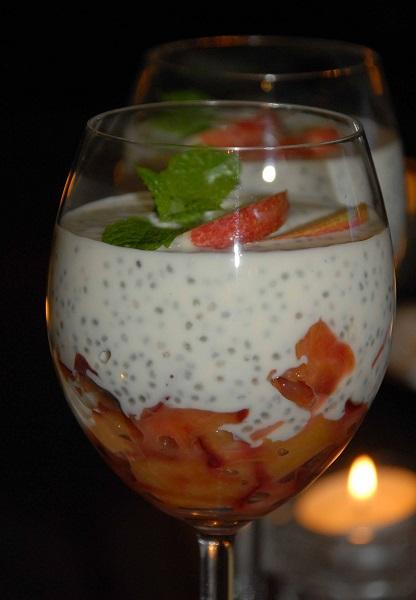 Today my proposal is how to get used to chia seeds in desserts. Though at first you might object to the dessert's consistency, it is worth persevering because it is really tasty.

Pour the milk, coconut milk, 2 tablespoons of honey and vanilla essence onto the chia seeds. Leave for a minimum of 4 hours. Melt the honey and butter in a pan. Add the cubed plums, apple and lemon juice. Fry for 10 minutes. Put the fruit into some cups. Leave to cool down. Put the chia on top. Decorate with the pieces of fruits and peppermint leaves.