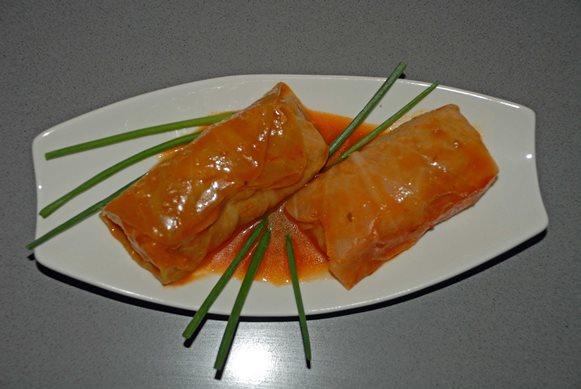 Many countries in the world have their own gołąbki, not always wrapped in cabbage leaves. We know very well small Greek meat dolmades in grape leaves. To the stuffed cabbage we can add different seasonings and sauces, and we prepare them in many different ways. In the Czech Republic and Slovakia stuffed cabbages are called hołubce, in some regions of the United States they are called glubkis, and in Germany they are known as Krautwickel/Kohlrouladen. This dish is known in  Sweden as kåldolmar, and in Finland kaalikääryleet. On the Balkan Peninsula similar dishes are called sarme.

In my family home we ate gołąbki wrapped in white cabbage leaves with a meat filling without rice. Now for my family I make something similar, but sometimes I split with tradition and I use savoy cabbage rather than white cabbage, and to the filling I add rice or I make vegetarian stuffed cabbage with buckwheat groats and vegetables.

Today I would like to share with you a recipe (in my opinion) for the most traditional stuffed cabbages with meat, rice and tomato sauce. 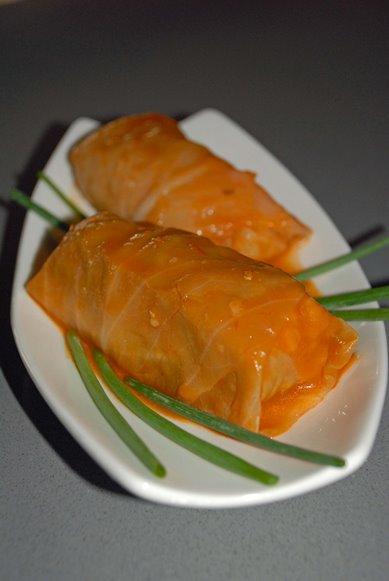 Slice off from the cabbage the thickest root and cut the stump off. Boil the cabbage in a big pot and, little by little, take the leaves off. Cover the bottom of the pot for stewing with the not so nice leaves. Cut the big vein from the nice leaves. Melt 2 tablespoons of butter in a frying pan, add the finely diced onion and fry until very lightly brown. Boil the rice for 10 minutes. Add the eggs, onion and rice to the mincemeat and spice it up with salt and pepper. Mix everything together thoroughly. Put the portions of filling on the leaves, wrap them up tightly and put them close together into the pot. Pour the water in, add a little salt, and stew for 20 minutes. Meanwhile fry the tomatoes in a pan with the rest of the butter. Blend them and add to the pot with stuffed cabbage. Spice the dish up with salt and pepper. Stew for 30 minutes.